An energy map provided by the National Oceanic and Atmospheric Administration (NOAA) shows the intensity of the tsunami in the Pacific Ocean caused by the magnitude 8.9 earthquake which struck Japan on March 11, 2011.

On 5 July 2012, the Japanese National Diet-appointed Fukushima Nuclear Accident Independent Investigation Commission (NAIIC) submitted its inquiry report to the Japanese Diet.[40] The Commission found the nuclear disaster was “manmade”, that the direct causes of the accident were all foreseeable prior to 11 March 2011. The report also found that the Fukushima Daiichi Nuclear Power Plant was incapable of withstanding the earthquake and tsunami. TEPCO, the regulatory bodies (NISA and NSC) and the government body promoting the nuclear power industry (METI), all failed to correctly develop the most basic safety requirements—such as assessing the probability of damage, preparing for containing collateral damage from such a disaster, and developing evacuation plans for the public in the case of a serious radiation release. Meanwhile, the government-appointed Investigation Committee on the Accident at the Fukushima Nuclear Power Stations of Tokyo Electric Power Company submitted its final report to the Japanese government on 23 July 2012.[41] A separate study by Stanford researchers found that Japanese plants operated by the largest utility companies were particularly unprotected against potential tsunami.[6] 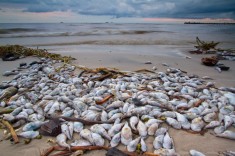 TEPCO admitted for the first time on 12 October 2012 that it had failed to take stronger measures to prevent disasters for fear of inviting lawsuits or protests against its nuclear plants.[7][8][9][10] There are no clear plans for decommissioning the plant, but the plant management estimate is thirty or forty years.[17] A frozen soil barrier is being constructed in order to prevent ongoing exposure of running groundwater with melted down nuclear fuel.[18]

In 2013, the World Health Organization (WHO) indicated that the residents of the area who were evacuated were exposed to low amounts of radiation and that radiation-induced health impacts are likely to be low.[31][32] In particular, the 2013 WHO report predicts that for evacuated infant girls, their 0.75% pre-accident lifetime risk of developing thyroid cancer is calculated to be increased to 1.25% by being exposed to radioiodine, with the increase being slightly less for males.

The risks from a number of additional radiation-induced cancers are also expected to be elevated due to exposure caused by the other low boiling point fission products that were released by the safety failures. The single greatest increase is for thyroid cancer, but in total, an overall 1% higher lifetime risk of developing cancers of all types, is predicted for infant females, with the risk slightly lower for males, making both some of the most radiation-sensitive groups.[32] Along with those within the womb, which the WHO predicted, depending on their gender, to have the same elevations in risk as the infant groups.[33]

A screening program a year later in 2012 found that more than a third (36%) of children in Fukushima Prefecture have abnormal growths in their thyroid glands.[34] As of August 2013, there have been more than 40 children newly diagnosed with thyroid cancer and other cancers in Fukushima prefecture as a whole.

In 2015, the number of thyroid cancers or detections of developing thyroid cancers numbered 137.[35] However whether these incidences of cancer are elevated above the rate in un-contaminated areas and therefore were due to exposure to nuclear radiation is unknown at this stage.

Data from the Chernobyl accident showed that an unmistakable rise in thyroid cancer rates following the disaster in 1986 only began after a cancer incubation period of 3–5 years,[36] however whether this data can be directly compared to the Fukushima nuclear disaster is still yet to be determined.[37]

A survey by the newspaper Mainichi Shimbun computed that of some 300,000 people who evacuated the area, approximately 1,600 deaths related to the evacuation conditions, such as living in temporary housing and hospital closures have occurred as of August 2013, a number comparable to the 1,599 deaths directly caused by the earthquake and tsunami in the Fukushima Prefecture in 2011. With the exact cause of the majority of these evacuation related deaths not being specified, as according to the municipalities, that would hinder application for condolence money compensation[38][39] by the relatives of the deceased.

Do you Know what to pack for a disaster?